Is "segmentation" projection-dependent? (metric only?)

Segmentation run via the mapla interface fails when I run on an image projected in US State Plane Feet. 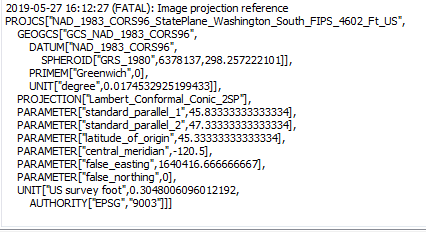 This seems odd because the “Edge Extraction” tool runs just fine on the same input file (in same units and projection).

FWIW…“Segmentation” runs to completion on some different data that I have projected in NZTM.

Hi,
You should try to use a different output format (other than shapefile, for instance SQLite). Apparently, it happens when the image projection can’t be normalized to ESRI.

I’ll look into alternate formats (I’m new to QGIS). It seems SQLite would be like a saving to a feature class in an ESRI file geodatabase, yes?

This appears to be working (I used a *.sqlite extension instead of *.shp). Thank-you for the suggestion.

For the “output GIS vector file”, what is the proper syntax if I want the LSMS output to be created as a new object within a pre-existing sqlite db? When I navigated to one via the “…” button and selected, I was asked if I wanted to replace the existing file. For example, in ArcGIS, I’d be able to navigate to a file geodatabase and name a new feature class to be created within.

To my knowledge, the SQLite database is not linked to the ESRI format.

You can try the option -mode.vector.outmode ulu in the Segmentation application. It will update the output vector file.