I’m trying to use otbcli_Mosaic (OTB 6.6.1 for ubuntu server 18.04) in order to generate an overlaping mosaic of two DEM. The problem is that the result is not as expected, and te overlaping NaN zones (the borders), appear as NaN if one of the two bands has NaNs. I tried to use the option -nodata (in https://github.com/remicres/otb-mosaic) but the parameter does not exist (maybe in the next version?).

This is the result that I’m getting: 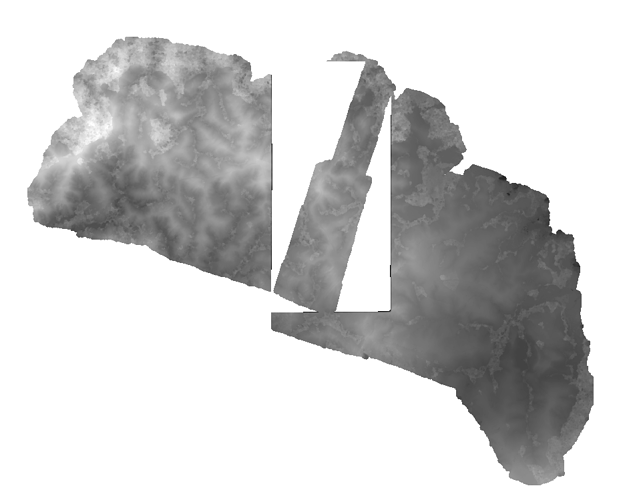 You can see that there’s problem with the overlaping borders (I wanted to show how the individual parts looks like, but I’m not yet allowed).

I’ve been changing these parameters:

It seems that anything I have tried, produce almost the same output.

DEM1 and DEM2 have NaN values as -9999, masked by gdal properly (gdalinfo shows that with NoData Value=-9999), but I have also tested the function with rasters with -9999 not defined as NaN. The shapefiles for vdcut/vdstats are a single feature masking all the DEM values that are not NaN.

What I’m doing wrong? Or is it nos possible to generate a mosaic as I want?

Here are some crucial information:

In your case, you have two input images dem1.tif and dem2.tif that you want to mosaic together, and you want exclude the no-data pixels. Since the app currently don’t deal with NaN values, you can solve your issue in using two vector data vector1.shp and vector2.shp that represent the valid parts of your images, I mean the parts that you actually want to be mosaiced together.

Your command line should be:

Thanks you very much for your help (and quick response)! I think I’m getting closer to the expected result, at least I’m getting the full image; I’m still having small issues regarding the output values.

Using 1 and 2, allow me to generate a smooth DEM in the overlaping zones, so I ended up using:

So far so good; my only actual problem is that the output DEM have slighly different values with respect to the originals DEMs; It is expected to have different values in the overlapping zones (or close to them), but not in all the new image (the difference seems to be no more than 1 meter). For example, new value is 63.05; original value in the same point is 63.52. These differences are not important in my case, but I think it’s good to know why is this happening

This difference of values (between your mosaic and your input images) might come from:

Since you use -comp.feather large, your output mosaic results in a weighted average of the input images (for each pixel, the weight is function of the distance to the closest no-data or vdcut boundary). So whatever the interpolator used, the values will change a bit (since your DEM have slightly different values in overlapping parts). By the way, it might be appropriate to use a bicubic interpolator, in case you intend to work on DEM slope.